COFFEE AROUND THE WORLD: THE MIDDLE EAST

Coffee Culture in the Middle East: Why Coffee is making a “comeback” in its birthplace (Part 1) The Middle East is literally where coffee was discovered, and how coffee consumption as we know it, was born. Around the 11th Century, the coffee plant was discovered by a goat herder in Ethiopia, and knowledge about the energizing berries spread across the Arabian peninsula.

And yet, today, the region remains one of the least known coffee markets in the world —surpassed by nearly every market in terms of actual consumption. But this is all beginning to change. The Middle East is seeing rapid growth in retail coffee sales, and together with Africa, is seen to become the fastest growing coffee region between 2013 and 2018.

Coffee growth is everywhere in Dubai, and the rest of the Middle East. From the boom of coffee shops and chains in the city streets, to the noticeable increase of roast and ground coffees in groceries, there is no denying the permeation of coffee culture in this known tea-drinking region. There are numbers to back this up as well.

According to figures published on Euromonitor’s Market Intelligence Portal in early 2015, the Middle East accounts for eight per cent of the global consumer spend on coffee ($6.5 billion), and it is growing rapidly. The UK-based research company, forecasts that the Middle East and Africa will be the fastest growing coffee region between 2013 and 2018 in terms of retail brewed volume, and the second fastest in terms of retail value, increasing by an absolute total of US$ 1.3 billion in retail sales. [1]

More than 4,000 tea and coffee houses are operating in the region today, proving that coffee is more than just a beverage — it is a national pastime in its own right. 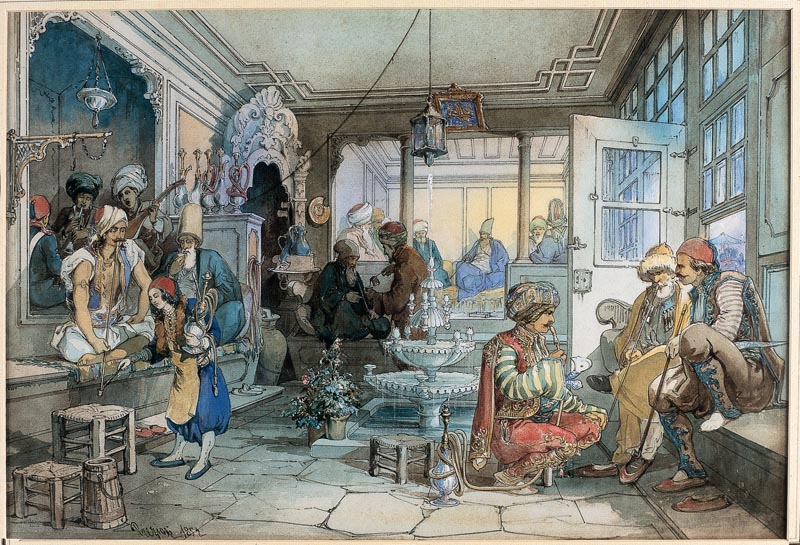 Coffee and its origins in the Middle East

While it was discovered in Ethiopia in the 11th Century, it wasn’t until the 15th Century when coffee was grown in Yemen that it began to spread across the region. By the 16th century it was known in Persia, Egypt, Syria, and Turkey. [2]

Coffee was then no longer just enjoyed at home, but also in the many public coffee houses (called qahveh khaneh), which began to appear in cities across the Near East. The popularity of the coffee houses then was unequaled and people frequented them for all kinds of social activity.

The patrons would drink coffee and engage in conversation, but they also watched musical performances, played chess and kept up to date with the news through peers. Coffee houses quickly became such an important centre for the exchange of information and knowledge that they were often referred to as “Schools of the Wise.”

This tradition has been passed on for generations, and today, showing respect over a cup of coffee is a founding element of Middle Eastern family and business culture. Serving gahwa (or coffee in Arabic) is a gesture of hospitality and generosity, and Arabians take it to mean that when someone asks to have a cup of coffee together, a discussion or an agreement is about to take place. [3]

So why is it, that despite coffee’s strong cultural implications in Arabic countries, consumption is still low? Perhaps it is because contemporary coffee consumption is still ceremonial than functional. When it comes to daily habit, tea is still the primary hot drink of choice. Indeed, in 2013, Saudis drank more than two and half times as much tea as coffee. [3]

Among the young Arab population however, “coffee culture” and overall consumption of the drink is gaining traction, as part of the increasing influence of Western culture.

On our next post, we’ll tackle how young Arabians and Western influences are driving coffee growth in the region.